In this tutorial we will learn the essential playing techniques & guitar tone of legendary rock guitarist Ritchie Blackmore.


Early in his career (during the 1960s), Blackmore played a Gibson ES-335. He switched to a Fender Stratocaster for the bulk of his hard rock years. With Deep Purple and Rainbow, Blackmore almost exclusively played a Fender Stratocaster. Although he prefers single-coil pickups, he sometimes experimented with different designs. Some of his single coil pickups were modified to be slightly higher output than a standard Fender single coil. He exclusively used the neck and bridge pickups. Often he had the middle pickup disconnected (because it was never used) and lowered (so it would not interfere with his picking).


He started with Vox AC30 amps, then switched to modified Marshalls. He has been known to use them both in combination; plugging his Strat into the Vox, then plugging the Vox ("slaving" it) into the Marshall. Essentially the Vox becomes a pre-amp and the Marshall is a power amp booster. The result is a very high-output, overdriven tone. Later he switched to Engl amps.


He has used various effects at different point in his career, including: a tape-recorder as a treble booster, various treble boosters, guitar synths, wah-wah pedal, bass pedals, univibe, fuzz, and octave divider.


He is also one of the first rock guitarists to use a "scalloped" fretboard where the wood is filed and carved out into a shallow "U" shape between the frets.


The essence of Blackmore's tone can be best captured with a Marshall amp and a Fender Strat. 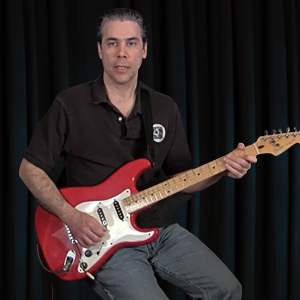