Chord Inversions are a very powerful musical tool. They can "open up" the entire fretboard for your use & thereby make your music much more expressive.

Major chords are defined as the 1st, 3rd & 5th note of a major scale isolated and, or played together. In this example I am using an A major chord. Since the notes of the A major scale are:

Then, the A major chord is the notes:

Played at the same time, this results in a triad, a group of three notes played together, that is an A major chord in it's most basic form.

Pitch-wise, the lowest possible place to start playing an A major chord on the guitar is to play the "a" on the 5th fret of the bottom E-string, the "c#" on the 4th fret of the A-string & the "e" on the 2nd fret of the D-string. This is called a Root Position chord because the notes are arranged low to high 1st, 3rd & 5th.

When you first learn to play you are limited by only knowing how to play a chord in certain specific locations on the fretboard. By applying the concept of a chord inversion you can learn every possible place to play any given chord all over the fretboard.

Notice that by playing the 1st (the note "a") one octave higher than it's original location you have created a different "voicing" for the chord. Now instead of:


You now have, low to high:


This is known as a First Inversion Chord voicing. To continue the concept, move the 3rd up an octave & you will get, low to high:

In this manner you can "cover the fretboard" with A major chords!

In short, there are many places you can find the 3 notes that comprise a major chord. The concept of chord inversions is what will help you to identify & organize them visually & auditorily.

The strict musical defintion of Chord Inversion is as follows:

Here is the notation for the sequence of inversions I am playing up the neck in the video. They are all A major chords in rising inversion voicings. 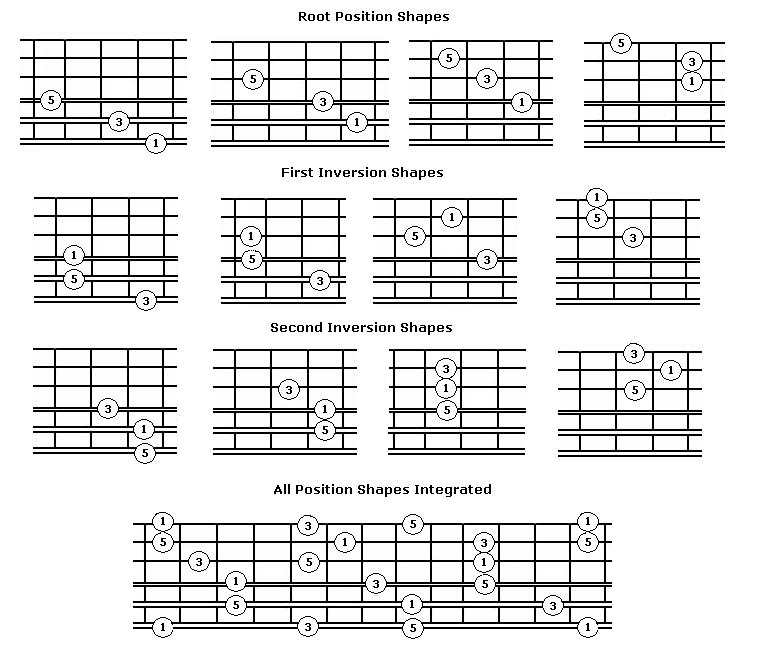