Previous LessonNext Lesson
Sometimes you will find the notes of the chords do not all fit in one scale. So, start by looking for a major or minor scale that contains most of them. Then look for the chord(s) that make for the exception. This is frequently a modulation chord; that calls for altering the scale just enough to accomodate the odd note. Let's use the D major chord as a modulation in our example. Example:

So we have the C major or A minor scale with one extra note, the f-sharp. The C major scale will work fine, of course for all the chords until you get to the D major chord. When that D major chord happens though, you will want to alter the notes of the scale to reflect this:

Notice that this can be seen as either a C major scale with an f-sharp, or the G major scale. Either way you chose to look at it, play those notes when the D major chord happens, emphasizing the chord tones d, f-sharp and a. When the song goes back to C major, A minor, F major, or G major, then return to using the f natural as is in the unaltered C major scale! 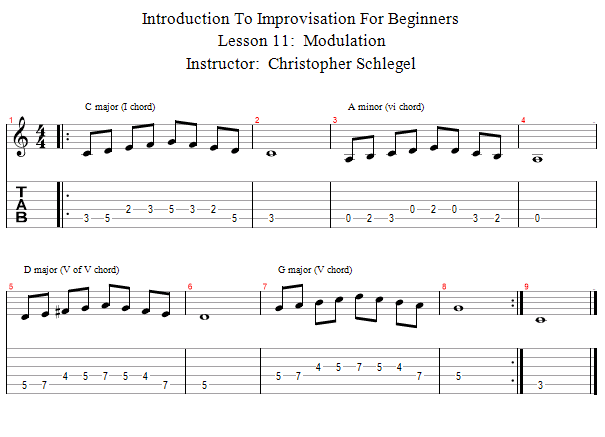 Learn more about your instructor

Introduction to Improvisation For Beginners