This is where things get interesting!

In this lesson I show how to incorporate all three chord voicings we've learned thus far: root position, first inversion and second inversion.

Close harmony is a method of organizing chord voices to achieve the minimal possible motion while moving from chord to chord. So, rather than jump from chord to chord using the same shape, we learn to create more musical options by mixing chord shapes while we change chords.

We start in this exercise with an A major in root position. The closest possible D major chord is a second inversion chord that shares the note A on the E string. When two consecutive chords share a note it is called a common tone. The other two notes of the chord move very minimally. One note moves up a half-step and another moves up a whole-step. Pitchwise, from low to high, we get:


We move back to the A major chord. Next we look for the closest possible E major chord. This happens to be the first inversion shape E major below the A major. The high note E is a common tone. The other two notes of the chord move very minimally. One note moves down a whole-step and another moves down a half-step. Pitchwise, from low to high, we get:


This is a very powerful musical technique that has incredibly wide ranging implications, applications and potential. 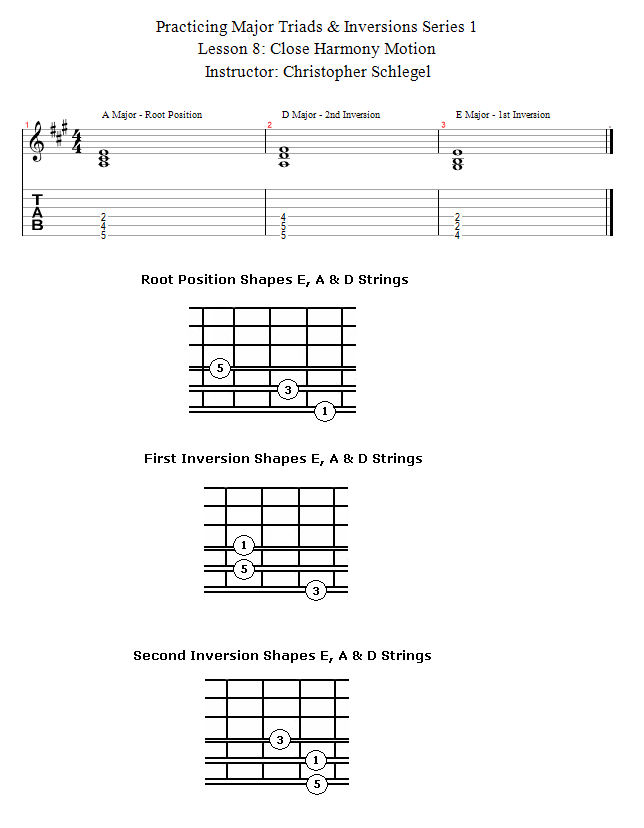