Basics of Voice Leading and Counterpoint

Voice leading is regarding all the notes present in a piece of music as part of a melodic thread.

For example, suppose a song in which there is a series of three-note chords being played. Each note of each chord is regarded as it's own voice. As the song moves from chord to chord, the top note (highest in pitch) of each chord is regarded as an entity called a melodic thread in it's own right from the beginning of the song to the end. The same follows for the middle notes of the chords forming their own melodic thread and the lowest notes likewise. These melodic threads are voices.

The ways in which these voices interact is regarded as how voice leading is accomplished in the song. The basic principles of Functional (Tonal) Harmony, the arising of a functional labeling of chords are a consequence of voice leading. For example, the concepts of the Tonic chord (one chord in relation to it's root being the same as the key in which the piece is written), Dominant chord (five chord being built on the fifth degree of the key), as well as Sub-dominant, & Intermediate, etc. chords exist because of voice leading.

In its bare-bones presentation, voice leading is essentially two simultaneous melodies (voices, lines, etc.): the melody and the countermelody; more formally known as the cantus firmus and the counterpoint.

Counterpoint is the practice of taking a given melody and playing a second note "against" each and every note of the melody. This creates a "secondary, simultaneous" melody line that relates to or "counters" the original melody line "point for point"; hence, the term counterpoint.

In Johann Joseph Fux's classic, timeless work on the subject, Gradus Ad Parnassum (typically known as The Study of Counterpoint) the basic principles and example applications of the same are clearly, systematically presented.

Note: the version I have & will be quoting-referencing is the translation by Alfred Mann (copyright 1971 ISBN 0-393-00277-2). The main focus of this work, and the subsequent theory and practice of the subject, is the study of the interaction of & types of motions available in leading the two voices.

The work starts by identifying a hierarchy of relative consonance/dissonance of musical intervals as such:


Next are the three types of motion available to voices:


The work then moves to the four rules the student is supposed to use as a guide as to the motion proper to the voices so as to achieve the proper intervals between the voices. These rules have to do with the nature of consonance or dissonance of intervals & the manner of motion in which one is to approach said intervals.


It is easy enough to see how to reduce these rules. Beethoven was said to have combined rule one & three, as well as, combining rule two & four based on the symmetry of their motions. He thus reduced it to two rules. The composer/theorist Martini reduced it to one, saying in effect: The only progression NOT allowed is direct motion into a perfect consonance.

The stated justification for these rules is to provide a variety of sounds. This is achieved in the rules by prohibiting the parallel succession of perfect consonances because it deprives voices of their independence and by the careful use of imperfect consonances so as to avoid monotony. Prohibiting parallelisms is key to me. This is true essentially because there is no justification for considering a voice a separate entity (a voice in its own right) if it merely mimics the other voice; especially in the form of a unison, fifth or octave. It can be a useful ornament, embellishment or effect but it is not a separate voice.

All of the examples clearly focus on the interval and progression of intervals occurring as a result of two simultaneously occurring notes of the two voices throughout a piece. The examples given are not "songs" or complete "pieces" per se. They are merely potential melodic lines or threads presented for the sole purpose of learning voice leading principles. There is typically a given melody line (the cantus firmus) with a possible counterpoint line. Occasionally there are "incorrect" counterpoint notes in the examples in order to show improper voice leading choices in contrast to better or more proper choices.

The given cantus firmus melody lines are written with the idea in mind of a singable melody line, starting and ending on the root note of one key, generally having one high (or low) point & frequently containing a good variety of differing motions (up & down, step & skip). Also, there is an excellent sense of goal-directed motion built into most of the cantus firmus melodies.

Unfortunately, this is not made explicit, but the perceptive, active minded student can identify it. For example, all of the melodies start on the root, most then move to the fifth of the key (the dominant) & finally move down step wise to the root at the end.

The beginning exercises only allow for the use of consonant intervals between the voices. This is not to suggest these are the only intervals acceptable in musical composition. It is merely to focus on the hierarchical importance of certain notes, intervals & ultimately harmonic implications in tonality. Later exercises introduce the use of dissonances.

There are several species of counterpoint in a plan of growing complexity in the amount of notes, amount of voices (from 2, to 3, to 4) & rhythmic values allowed in the various examples. There is eventually a suggestion for the moving on from "strict counterpoint" study to "florid counterpoint" and ultimately "free composition" in which actual pieces or songs are supposed to be produced using the stated principles.

If the student consistently follows the examples of the book, it is possible to see that the concept of goal-directed motion is the central premise in tonal music. This is presented in the form of a melody that implies a harmonic framework or such a melody with an actual harmonic context present in the form of counterpoint voices.

Two things are frequently surprising to many beginning students of counterpoint. One is the difficulty in consistently creating acceptable voice leading with such simple materials. Second, after the student has gained some skill & applies these concepts to actual songs/pieces of existing music, some students are amazed at how consistent "catchy" or "hummable" tunes, songs, and melodies are with the principles stuffy old Herr Fux has outlined.

Interestingly, it is rather easy to apply voice leading principles to Popular styles and genres of music. Typically, it is easy to identify the main melody line; then, isolate the supporting counter melody in the form of a guitar, bass or piano part. From this information one can then draw a simple chart of the bare-bones melody and the counterpoint presentation of the song.

Once this reduction is accomplished it is easy to see the overall structure of the song, its beginning, middle & end; in other words, it's goal-directed motion. Applying Schenkerian concepts to this bare-bones structure is also quite an useful and straightforward matter. This is primarily because it goes right to the central premise in application of Schenker's theory: there is a background level (most important hierarchically) of information in any tonal piece. Every note in a piece is present in the foreground level, then it is the theorists job to place relative value on each note, thereby reducing the structure eventually to it's bare-bones melody and countermelody function. After this is done, it is easier to see the goal-directed nature of the piece. The goal-directed nature of the piece answers key questions such as: 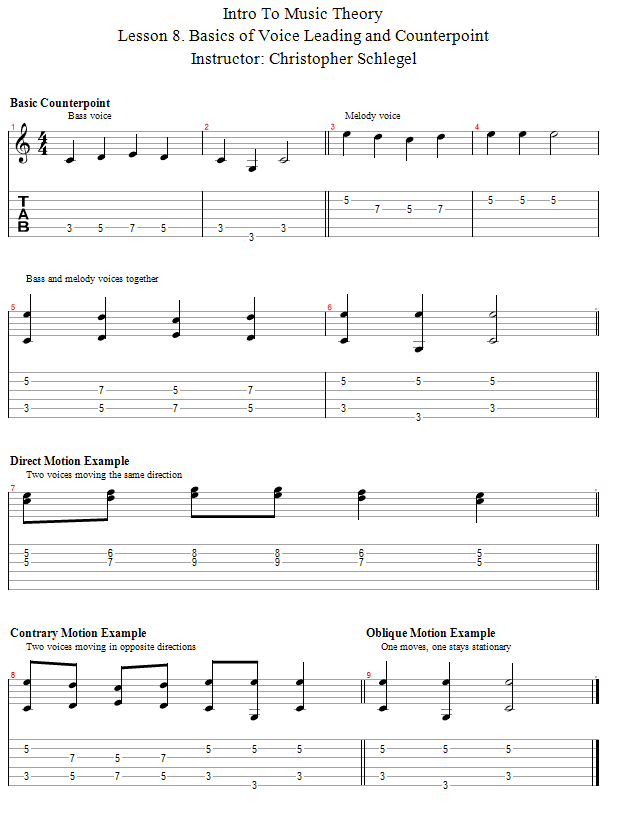