Music Theory is the set of concepts that describes the nature of musical events. It is the process of mentally identifying the sounds that occur in music. We do this in order to build a consistent set of ideas to describe what happens in music.

In music the basic unit of measurement is the interval. An interval is the distance between any two notes. Intervals are measured in steps. Most instruments are divided into half step divisions. On a piano the musical distance from one key to the next adjacent key is one half step. On a guitar the musical distance from the note on one fret to the note that sounds on the next fret is one half step.

The physical reason (literally the scientific physics) behind this idea works as such. Any sound that is "pure" enough to have one fundamental frequency that it vibrates at can be called a "pitch". Pitches are measured in Hertz. A Hertz is how many times per second any given pitch cycles. The lower in sound the pitch is, the lower the number of Hertz; alternately, the higher in pitch, the higher in Hertz.

Suppose you hear a pitch at 110 Hertz (the low open A string on a guitar). Then you hear a pitch at EXACTLY double the first pitch at 220 Hertz (the A on the 12th fret of the A string). This is a ratio of 2 to 1. It is expressed like this, 2:1. Humans hear these two pitches (the second exactly twice the first) in a very special way due to the curvature of the cochlea (a part of the anatomy of our inner ear). These pitches "sound very much the same" to us. We call this "very similar sound" an octave.

We then start dividing the octave into smaller units. Finally we wind up with the most convienent and purposeful way of dividing the octave: into 12 equal parts. Guitars and pianos (and most musical instruments) are designed and built with the explicit intention of providing the player with a way of playing notes that are precise interval distances apart.

We then call these 12 equal parts "half steps". Therefore an octave is divided into 12 equal musical distances. They are labelled as such:

The trickiest part of learning to apply this idea to the guitar is that frequently the two notes you are trying to "see" the interval between are on two different strings. So, get used to learning intervals on one string, then start to apply it to multiple strings. For example, if you understand the list of intervals I wrote above, you can see that the interval between the notes G and D on the bottom E string is 7 frets, and therefore a fifth:


It can more difficult to "see" the interval of a fifth if the D is on a different string, though:

I also did this tutorial with videos that explains a bit more about the intervals:
Intervals for Beginners 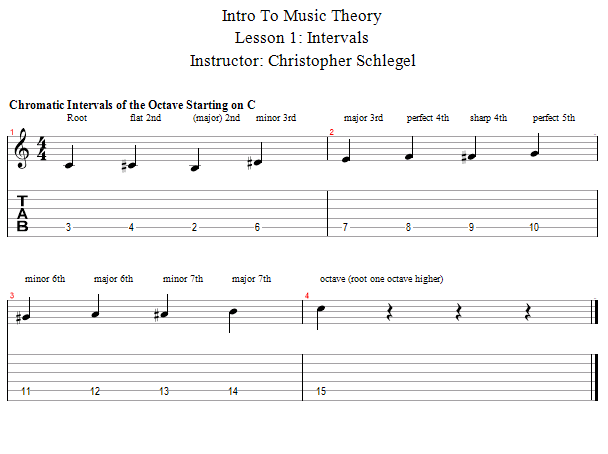